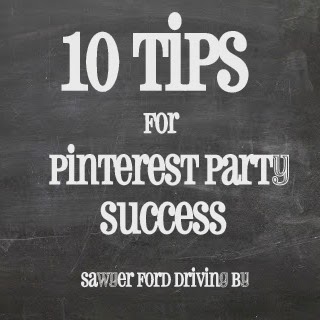 Have you ever taken part in a Pinterest Party? I had not until last night, when I pinned along with the One Stop DIY Shop’s Spring Fling on Pinterest. It was frantic, crazy, and wonderful, and I had so much fun! Plus I walked away with some great digital party favors!

As this was my first time “attending” such an event, I wasn’t really sure how it worked, so I thought it might be helpful to post some tips I learned through the experience.

The object of this party was to pin, pin, pin all the great pins being put up every few seconds by the 13 amazing bloggers hosting. There was also a grand prize giveaway and several smaller giveaways pinned during the party.

1. Set an alarm or reminder for yourself for a few minutes before the party starts. These are fast paced events, and you don’t want to get behind, or worse, miss it all together because you forgot or lost track of time!

2. Make sure that your computer/phone/tablet has a good charge before the party starts.

3. Do your very best to make sure there will be no interruptions. Go to the bathroom beforehand, get the kids occupied or in bed, let the dog out, and make sure there are no problems with your internet connection.

4. Beforehand, create a specific board to pin everything from the party to. You can go back later and edit each pin to sort them to the boards they belong on, but you will waste valuable time trying to find the correct board for each pin during the party.

5. This is probably pretty obvious (and the hosts were great about reminding us), but refresh your screen every few seconds to make sure you’re not missing any pins! Also, stay on the party board rather than the Pinterest home page. Your home page will also be showing you pins from outside the party, and you may miss a giveaway in all the confusion!

6. This may seem like overkill, but it’s not a bad idea to have the party pulled up on two devices (ie. laptop and phone/tablet) if you have them available. I found that my Iphone was more efficient in some ways, such as being able to use the long press to quick pin on my Pinterest app, but my laptop was better if I actually needed to click through on a pin, such as for pins about giveaways that came up during the party.

7. Speaking of those giveaways, click through to see if you need to enter during the party. If you don’t, just pin it so that you can go back and enter later. A lot of giveaways will have several tasks for you to complete for multiple entries, and often they will require you to move away from the blog to Instagram, Twitter, Facebook, or the blog’s Pinterest account to earn those entries. I wasted a lot of time trying to get my entries in during the party, and I got behind on my pins and really had to scramble to catch up!

8. Even if you don’t do it during the party, do try to show your hosts some love as soon as you get the chance by following them on the various social media platforms they use. A lot of love, work, and even money has gone into making this party happen for you, so show your appreciation!

9. If there’s a giveaway at the end of the party, stick around until the final winner is announced! The hosts ended up having to draw 5 names before one of them responded to the announcement of the winner of the {very} nice grand prize! I know those first four ladies are probably kicking themselves that they missed out! I do understand that there may have been extenuating circumstances that prevented them from responding – this is NOT a criticism! But there were a lot of ladies commenting on the 2nd drawing announcement that they had missed the first name because they went to check their email for the winner instead of watching the party board. Check your email by all means, but don’t abandon the party board until the winner is confirmed. I think a lot of people logged off after the first name was announced because they assumed it was over, but there were multiple pins put up after that, and the announced first (and second, third, and fourth) winner ended up not responding in time.

10. There may be a survey after the party (I was asked to complete one when I was emailed the link to my party favors). Take the time to fill it out to help your hosts know what you loved or didn’t love so much about the experience. This will help them plan their next event for you, and it also helps them to see the impact that the event did/will have on their blog.

*Bonus tip* Be gracious! Be polite in your comments, and be appreciative of the opportunity to interact with some awesome people and pin some great ideas, even if you don’t walk away with the grand prize!

A huge thank you to the following bloggers for hosting this event: