So Halloween was kind of a wash. Almost literally. We got like 5 houses into trick-or-treating and got blasted back home by sudden torrential icy rain. At least we weren’t all the way on the other side of the neighborhood when it hit, but it kind of killed our enthusiasm for more. I spent all day at Joann’s getting a crazy good deal on a ton of felt for our upcoming 4th Quarter Ladies Craft Meeting at church, and I got home much later than I planned, so Lily’s adorable Tinkerbell-esque tutu that I had planned on finishing turned into a very simple gathered tulle skirt that I knocked out in 10 minutes and is literally the worst thing I have ever sewn. I couldn’t get the elastic to feed through the casing, so in a fit of desperation I stretched it and sewed it directly to the waist band, but I couldn’t get the gathers to cooperate and ended up having to add an extra piece to get to the end of the fabric width. Then the whole thing ended up being too big, so I had to sew in some very messy extra gathers, and it was really just disastrous. BUT, Lily loved it, and when I told her later that I was sorry we’d gotten rained out, but that I thought she’d looked very beautiful in her costume, she sadly shook her head at the weather, sighed, and said, “Thanks. I thought so too.” Lol. But I still have more green tulle, so I’m going to try to make that originally planned tutu for her just for dress up when I get the chance. Or maybe for Christmas. Two birds with one stone and all.

Anyway, that’s my craft fail for the night. Sadly I couldn’t get Taylor to pose for me in her Batman themed costume, but here are Fairy Princess Lily and Goofy Gorilla Sawyer. I wish I had a better picture, but we were in a hurry, so I thought, “I’ll take more when we get back”, and of course when we got back we were all encased in icicles, so this is what I’ve got. And Sawyer’s shirt was supposed to be long sleeved, and in fact my mom bought him a new one just for the occasion, but when I went to grab it from the place it has sat for two weeks just waiting, it was gone, so he wore this one instead. He did wear a coat out over it. 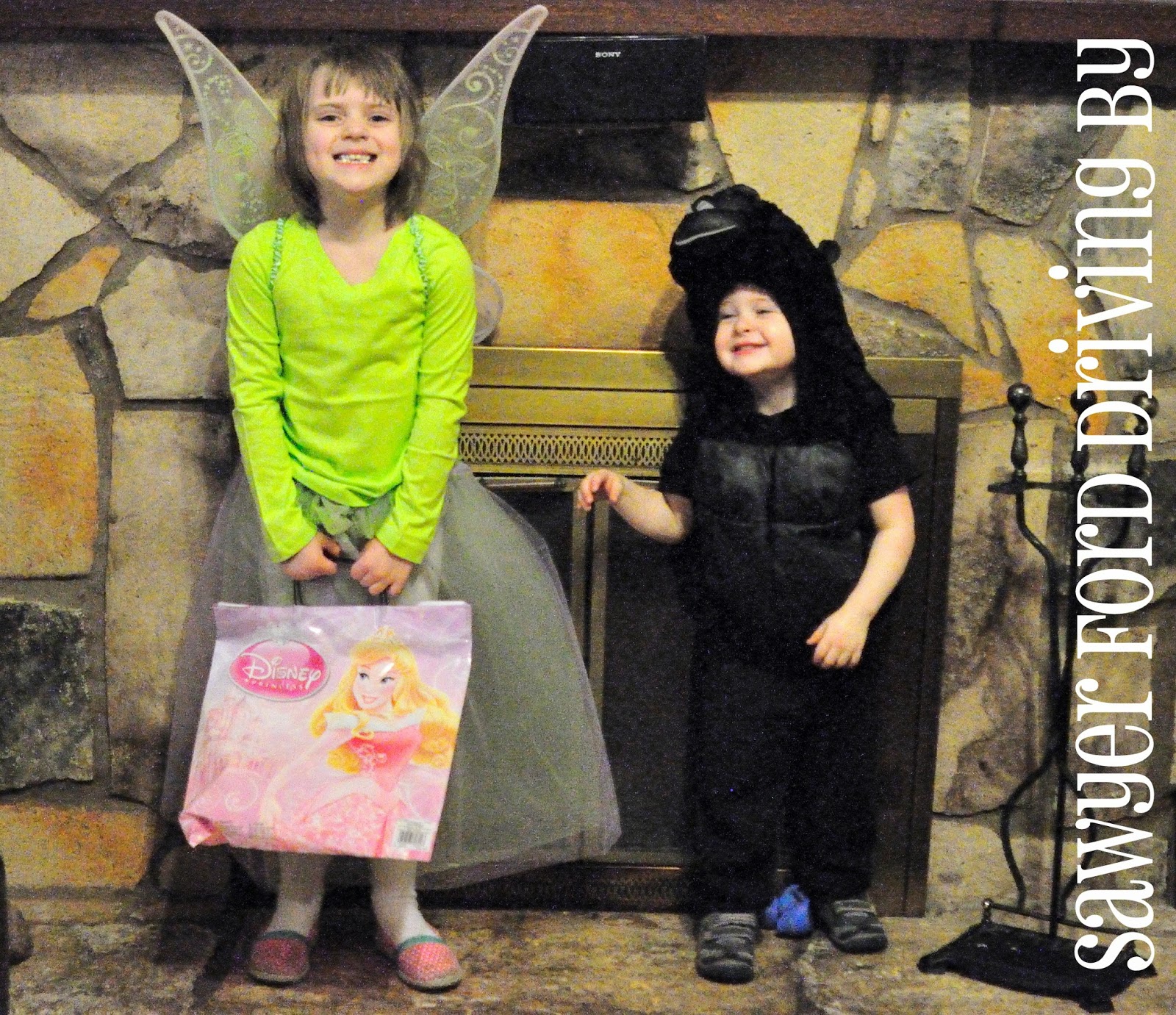 Do you see my poor empty fireplace tool rack? Yeah, no clue where any of those went. Ask that shifty ape standing there.

On the upside, Nick carved some AMAZING pumpkins, which he does every year. And I got these beauties at Aldi for $1.99 each! What? I love that store! Actually I’ll take some daylight pictures tomorrow so you can see the size and shape of them better, but Nick was kind enough to grab the all-important illuminated shots for me while I was out getting assaulted by Mother Nature. 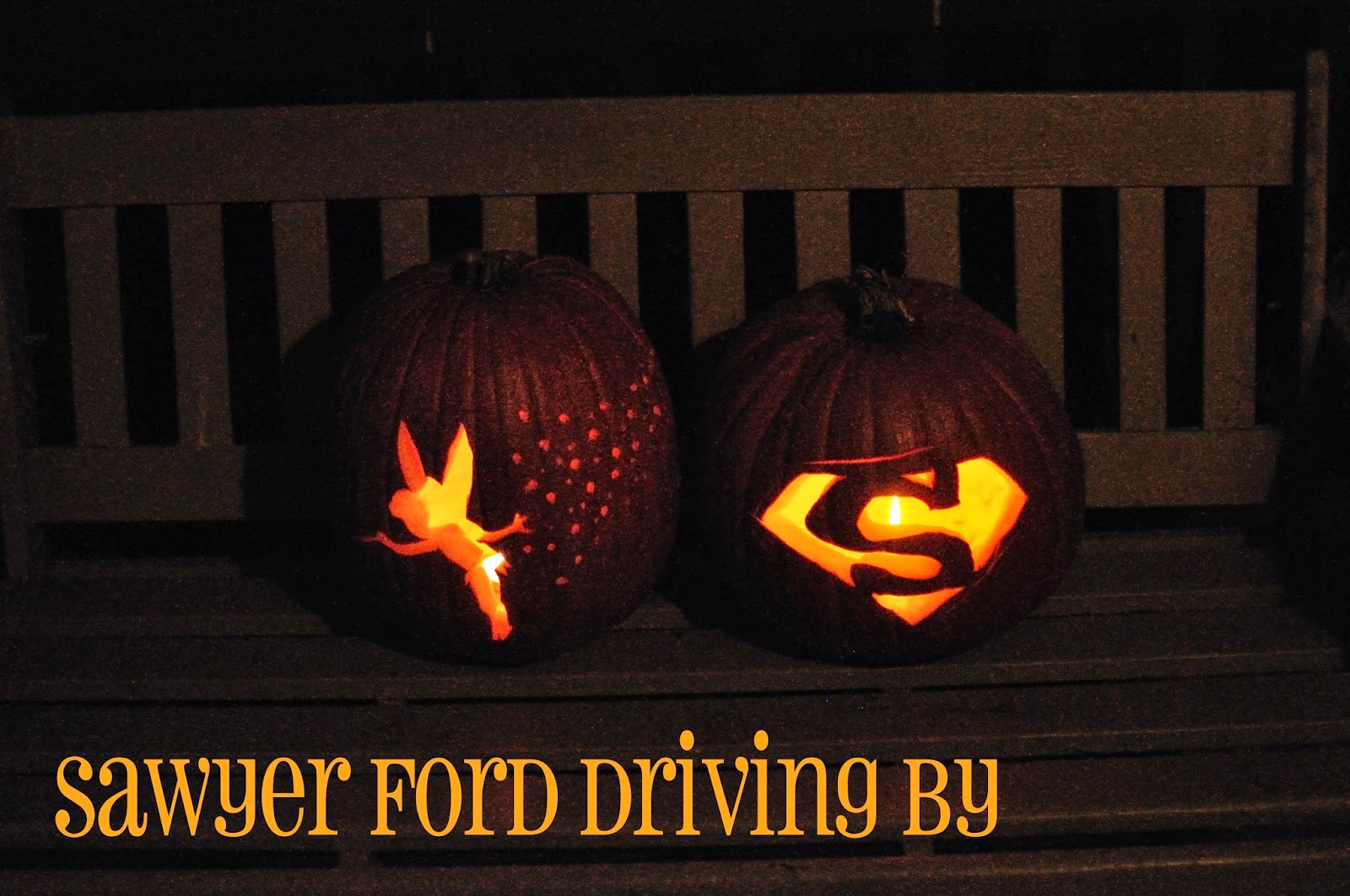 Tinkerbell with fairy dust for Lily. Can you believe he freehanded that? And Superman for Taylor. 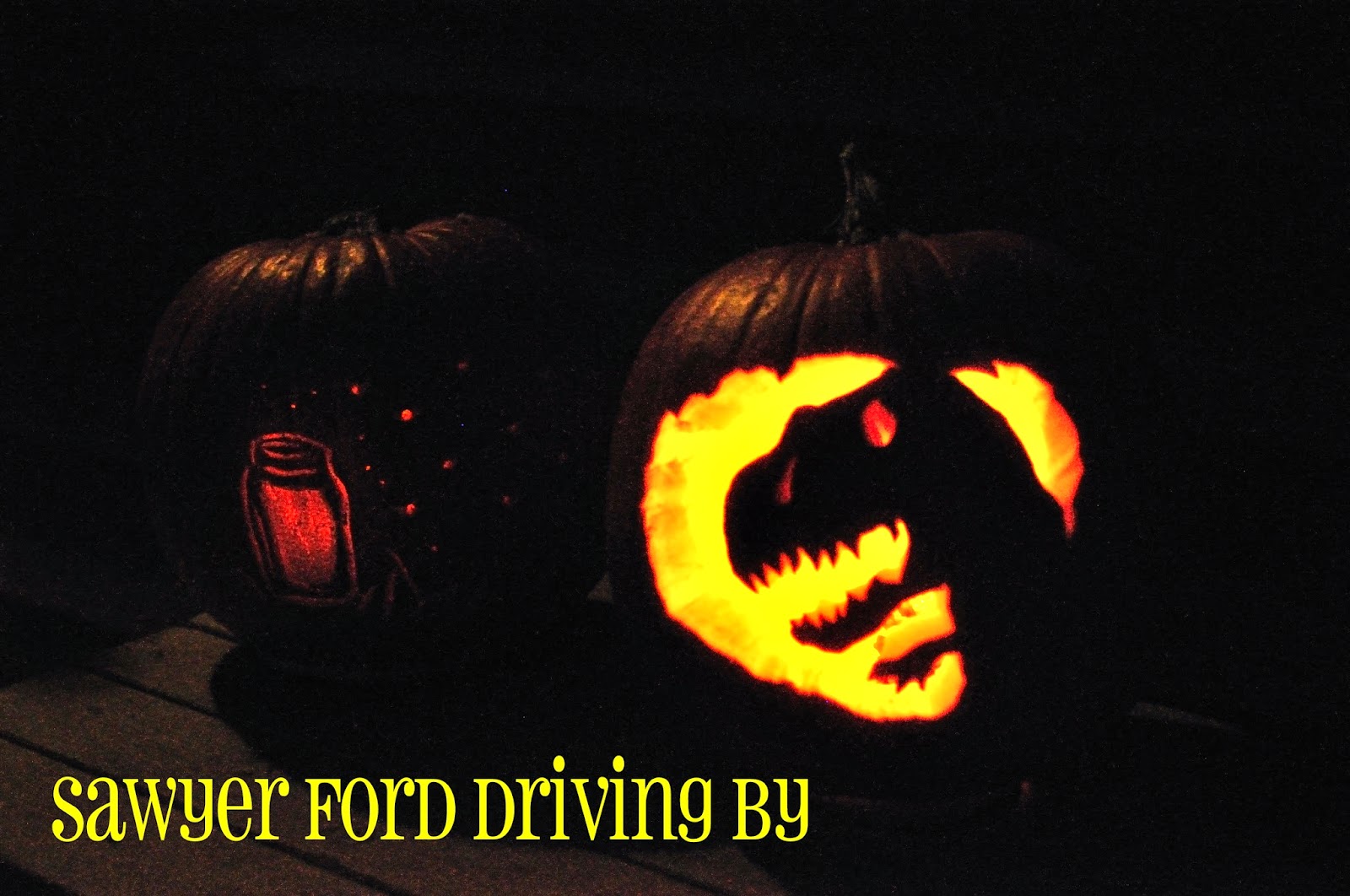 A mason jar with fireflies for me. I have to take a daytime picture of this one for you, because it turned out SO cool! I found the inspiration pumpkin through Better Homes and Gardens. T-Rex was Sawyer’s, and it was a pretty sure bet that his design choice was going to involve either dinosaurs, cars, or army men. 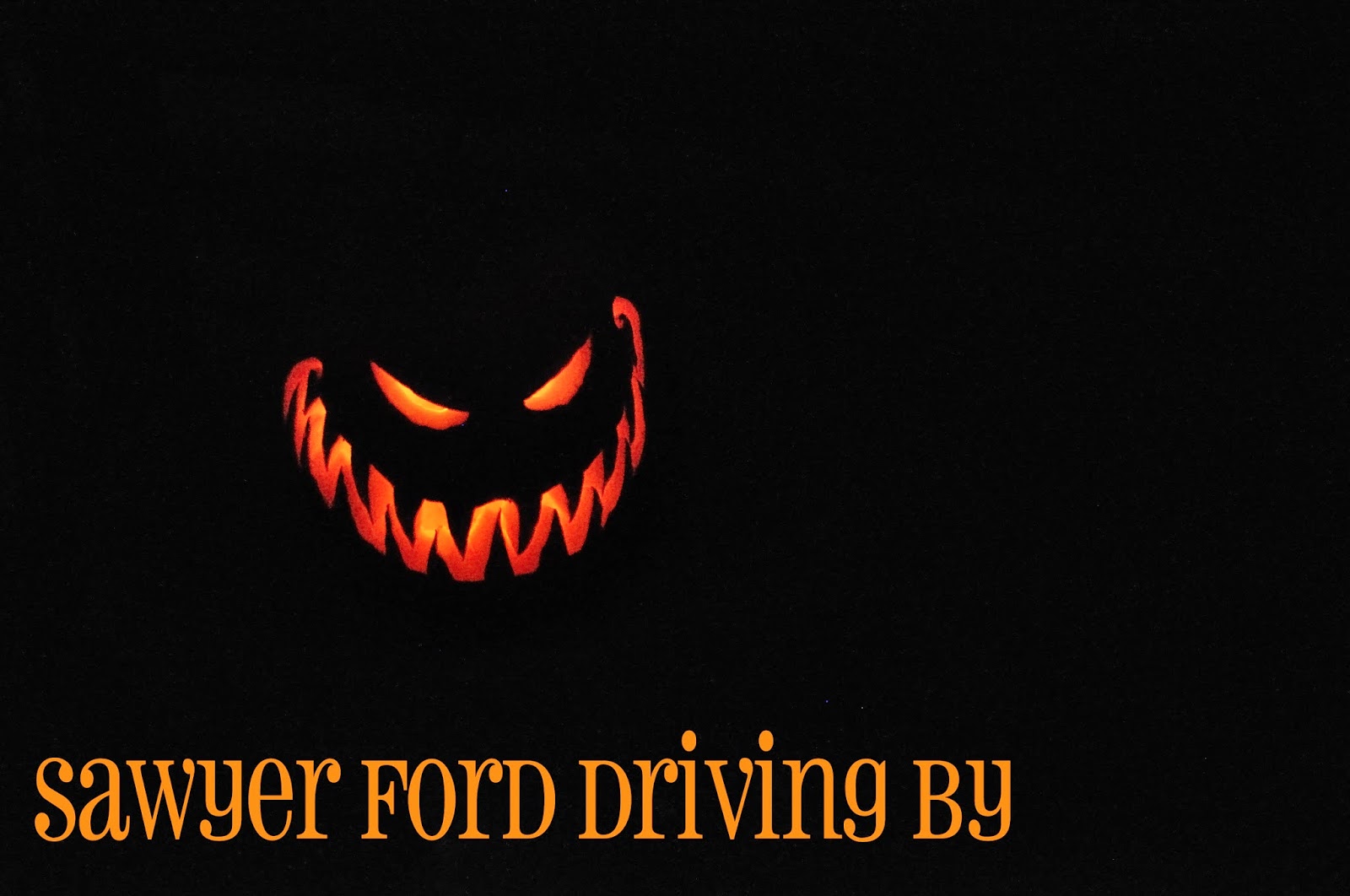 Nick did this crazy wicked grin for himself, and I think it might actually be my favorite.

After our unexpected cold shower, we warmed up for a bit and answered the door for the few trick-or-treaters who showed up after that, mostly, it seemed, kids being chauffeured from door to door by parents in cars. Quick rant – I HATE this. I think there’s never a good reason to do this. I get that not everyone lives in a neighborhood great for giving out candy, but if you need to find somewhere for your kids to trick or treat, either pick a neighborhood with a safe place to park and walk, or attend one of the myriad events offered in nearly every city and town by churches, malls, YMCAs, rotary clubs, schools, etc. Generally a neighborhood with good enough pickings to draw visitors will be teeming with kids on the street in the dark, and while yes, it is the parents’ responsibility to keep their kids safe, don’t make that harder to for them to do by unnecessarily driving your mini van between rows of kids and toddlers likely to be distracted by passing costumes, decorated homes, and thoughts of candy. Sadly there are kids struck by cars while trick-or-treating every year. And while I had a firm grip on Sawyer and Lily the whole time, and even carried Sawyer part of the time, I know how easy it is for a toddler to break free. Okay, rant over. 🙂

After we were all warmed up and the costumes had been run through the dryer (yes, even the gorilla. For $2.99 at the thrift store, I can afford to live on the edge), we got the littles dressed again and headed over to see Nana and Papaw, who more than made up for the grievous candy shortage caused by the wintery storm. All things considered, not a bad night after all.